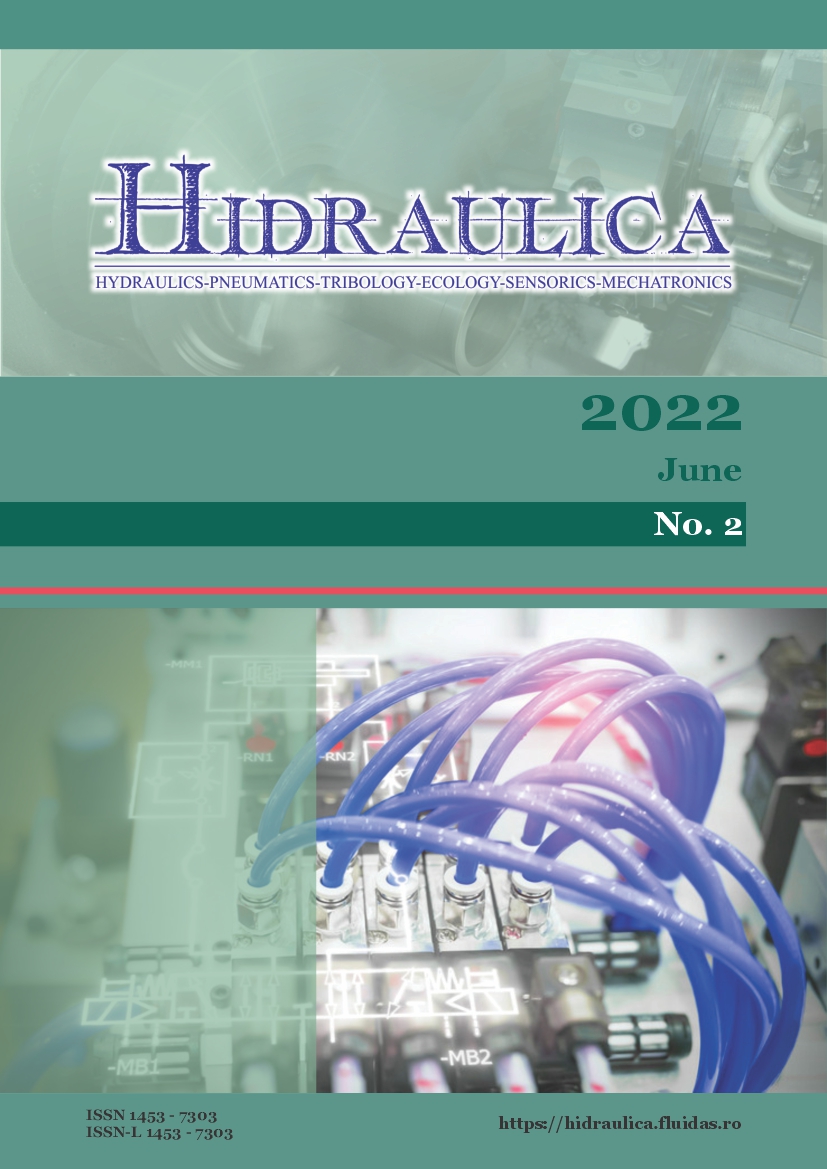 The article presents the virtual experimentation of a closed circuit hydrotronic transmission that aims at the precise control of an angular displacement with the help of a semi-rotary hydraulic actuator, experimentation performed by using Simcenter Amesim numerical simulation software. Such position control systems are often used in … (read more)

Mathematical Modeling and Simulation of the Operation of Hydraulic Systems with Resistive Adjustment
Author: Anca BUCUREȘTEANU

In this paper, the author presents, based on mathematical models in static and dynamic conditions and with the help of simulation programs, how to achieve the resistive adjustment of the operating speed of the hydraulic cylinders. The described models take into account the characteristics of the cylinders and throttles, but also those of the pressure valve. In all cases it is considered that the drive pump has constant capacity and is actuated by … (read more)

The article presents the development and execution of a simple practical experience, which aims to help students of a civil engineering course, in a better understanding of the theoretical concepts involved in the topic of head loss in pressurized hydraulic conduits. Initially, a literature review is carried out, regarding the importance of practical classes in student training, laboratory practices, and experiments. Afterwards, the methodology used is presented, through measurement tests and the respective impacts on the flow rate, obtained by varying, one at a time, … (read more)

Wind energy is becoming one of the most widely used renewable energy sources in Romania as well. In order for production to be efficient and implicitly profitable, wind turbines are usually arranged in wind farms. The main purpose of the paper is to present intelligent criteria and tools for designing wind turbines. In the present study, the following are pointed out as topics of interest: the shading of the wind given by an obstacle, the height of the turbine hub, the distance between … (read more)

The paper proposes that the water aeration to be carried out by introducing compressed air into the wastewater transport pipelines. For this purpose, a system for dispersing the air in the water flowing through the pipes was designed and built; the air coming out through a series of orifices drilled in a spiral mounted inside … (read more)

The present study uses the CFD numerical approach to analyse the flow of water through the model of an ecological water intake structure located on the bank of a river. It aims to obtain and validate qualitative and quantitative hydrodynamic parameters, by comparing the numerical results with experimental data obtained previously on a small-scale model built in the laboratory. For this purpose, several numerical flow geometries with corresponding discretizations are specially built, under two simplifying assumptions: a 2D model, solved with … (read more)

The determination of operating policies of a system of cascade dams for the purpose of electricity generation is a widely studied problem; the approach of the minimum and maximum extraction volumes between which the extraction policy must oscillate, taking into account the installed and physical capacity in the reservoirs, are data that are commonly set in the analysis. In the case of a cascading dam system, stochastic dynamic programming (SDP) has turned out to be an optimization algorithm that, with relatively little computational cost, solves the problem of … (read more)

Due to the pressure that landfills have on the environment, the article deals with the possibility of recycling waste from abrasive water jet cutting machines (AWJCM) because this waste either takes the path of storage (abrasive sludge) or is discharged into public sewer systems (wastewater). Thus, for the abrasive sludge, two new mortar recipes were proposed, made by replacing fractions of sand with abrasive sludge. The series of cast samples R1 and R2 were subjected to mechanical tests and an increase in … (read more)

Last year, my self-developed energy robot, HEAT SPOTTER, won high commendation at the 30th INTERNATIONAL SCIENTIFIC AND INNOVATION COMPETITION. The robot is patent pending, as recommended by the jury. In the meantime, I have improved the robot in many ways. The main aspects of this process have been … (read more)

The paper presents a discrete 2D numerical modelling on Trotuș River – in Tg-Ocna, at an accidental flood and known configuration, given by the hydrograph registered between 2-8 June 2016. The purpose of this modelling is to estimate the parameters of transient hydraulics (non-permanent), respectively, specifying some constructive aspects of … (read more)

The paper analyzes the equation of the oxygen transfer rate to water; the factors that lead to the increase of this speed are specified. Further, a single factor is studied, namely “shrinking the orifice diameter” in the perforated plate of … (read more)

What about the specialists in the field of hydraulics and pneumatics nowadays?
Petrin DRUMEA
Managing Editor

In the last few years, the development of hydraulics has seen a gradual decline in all sub-domains and in all directions. We don’t have much conception and design capabilities, we don’t have much production, as well, and, more recently, we are no longer able to maintain hydraulically operated machines. For years we have had a professional association that … (read more)