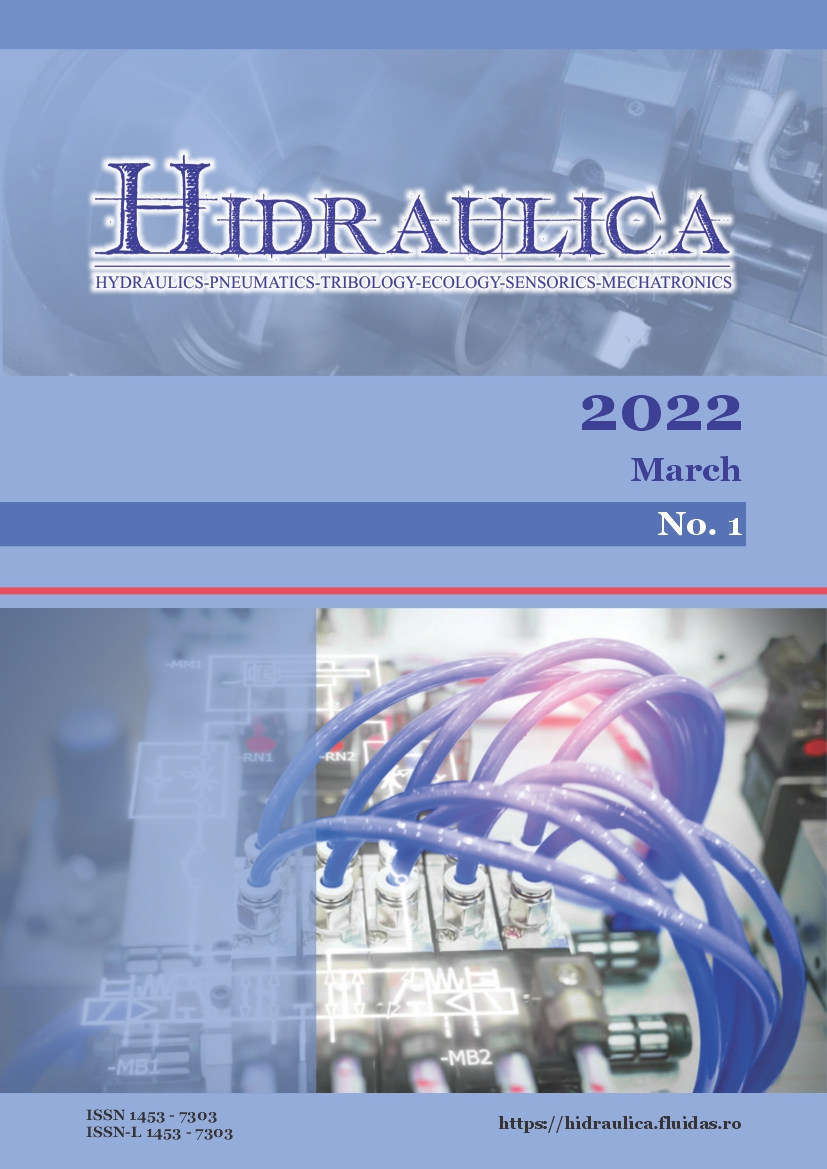 Starting from the observation that the hybrid wind-solar systems are perfectly complementary both during a day and during a year, an experimental facility was designed and built, consisting of a Savonius wind turbine with helical blades, covered with thin, transparent film of flexible photovoltaic cells. The experimental results show a power coefficient of 0.265 for the Savonius helical rotor and operation starting from wind velocity of 0.65 m/s. This facility can produce energy from two sources, wind and sun, and even more, it ensures … (read more)

Synchronization of the Travel of Hydraulic Cylinders. Modeling and Simulation
Author: Anca BUCUREȘTEANU

In this paper, the author presents the theoretical research and simulations performed for establishing some variants of hydraulic drive for the units that require two or more cylinders. Two simple and affordable methods that do not entail special expenses are shown comparatively. The solutions can be applied for systems that do not require … (read more)

ARX-type parametric autoregressive models were used to identify the best fit to precipitation effective data and direct statistical runoff corresponding to a 100 years return period, under assumption that a runoff rain process can be treated as a linear system; this model was validated with data from another rain runoff event corresponding to a 10,000 years return period; the best model obtained was the ARX 1 1 1 type. It consists of … (read more)

The paper presents the results of the experiment of behavior and resistance to vibration cavity erosion, carried out on cast aluminum alloy 5083 heat treated by hardening at 450 °C and maintained for 12 hours at the artificial aging temperature of 180 °C. Following the experiment … (read more)

Given the current context regarding environmental pollution, in which conventional installations also participate, the aim of this article is to analyse whether photovoltaic systems are a viable solution to help solve this problem. Thus, the article analyses the way in which the electricity production of photovoltaic installations is influenced by the aging of the photovoltaic cells that make it up, but also by … (read more)

Starting from the equation of oxygen transfer rate to water, a mathematical connection is established between the concentration of dissolved oxygen in the water and the diameter of the air bubble introduced in … (read more)

The welding head of the containerized and completely independent mobile machines for flash-butt welding of train and tram tracks is operated with the help of a hydraulically actuated rotary crane. The article shows a hydraulic station that provides the hydraulic energy needed to … (read more)

Simulations regarding the Modernization of the District Heating System in Timisoara by Controlling the Supply and Regulating the Temperature of the Heating Agent
Authors: Daniel MUNTEAN, Matei MÎRZA, Adriana TOKAR, Dănuț TOKAR

The current context of climate change requires the efficiency of district heating systems. The article proposes the implementation of modernization solutions for district heating systems in order to reduce heat loss on the distribution system and implicitly CO2 emissions at the level of thermal agent production. The case study analyses the supply of the Forestry Technical College from Timisoara, which has a heat demand for the building of 1MW and is located at a distance of 1200m from the nearest thermal point. Simulations were performed for several efficiency stages of … (read more)

The authors of this article have developed three high-pressure pumping modules, composed of low-pressure electric pumps, equipped with oscillating hydraulic pressure intensifiers (miniboosters), which they intended to use to supply hydraulic cylinders of small dimensions and high forces. Due to the flow and pressure pulsations that occur at the outlet of the minibooster secondary side, such pumping modules are recommended for applications with static loads, which imply … (read more)

The paper presents the constructive solution of a fine air bubble generator that is used to aerate waters. This generator is provided with a perforated plate, which has orifices for the introduction of air into the water, as follows: … (read more)

A railway track welding machine has several components in its structure, the most important being the welding head, which performs the electric flash-butt (end-to-end) welding of the train and tram tracks. Maneuvering the welding head and positioning it on the rails to be welded is done with the help of … (read more)

Scientific research, including research in hydraulics, in our country has been in a permanent decline for several years, not only since the pandemic periods or since the serious conflicts in nearby areas. The decline of research in Romania began with the gradual reduction of the allocated funds, with the reduction of the number of researchers and specialists, but also with … (read more)